It has been quite awhile since I posted anything on this blog… Life just got so busy and time slipped away from me. Indeed, a lot has happened in the last two years! I started teaching fiddle lessons, I played more shows than I ever have in my entire life, I had a hysterectomy, I got married, I attended the funerals of two grandparents and a beloved uncle, and I started a career in insurance.

Although some might more easily recognize this whirlwind of change as a source of stress, I was not so insightful. In fact, at first I didn’t even realize how busy I actually was… Nonstop action became my normal state of being. I worked two different careers during the day and then played music at night — sometimes up to 4 nights a week. I got a smartphone back in July 2014, and it instantly took up far too much of my time. This constant state of doing and cyber-connectivity began to put pressure on my relationship with my husband; I was not spending enough quality time with him. But still, I felt compelled to grow my little insurance business, to take on more fiddle students, to say yes to any and all show opportunities that came my way (and to check Facebook… just one more time).

When people asked me “How do you do it all?”, I would just smile and shrug it off. But inwardly that question caused me to cringe. I had a painful, nagging sense that maybe I was trying to do too much — somewhere, somehow, something would eventually have to give.

My personal suspicions were confirmed when I started having daily heart palpitations in December of 2014.  It was so scary because no matter what you do, it is impossible to ignore your own heart beat once it goes awry. If you’ve had them before, perhaps you can relate – it feels like a ticking time-bomb is nestled inside your chest. I couldn’t sleep, I couldn’t think straight, and it was hard to enjoy anything (not the best way to spend Christmas — laying in bed at 4 o’clock in the morning worrying that you might have a heart attack at any second). To their credit, the doctors did a lot of heart tests to rule out any heart conditions; they even performed a stress test. But after everything came back negative, they said that it was simply stress that was causing the palpitations. At that point I was pretty much left to my own devices to make them stop.

I knew that I was busy, and that I often wished that I had a little bit more down-time, but it was still hard for me to believe that something as emotional as stress could cause my heart to throw in extra beats at least three times every minute. Despite being skeptical, I tried to heed my doctor’s advice: CHILL OUT. I stopped drinking alcohol for several months, I came home more often after work instead of meeting up with friends, and I made sleep a major priority. I got counseling, I went on a low-dose beta blocker to help slow down my heart rate, and I even started meditating (once and awhile, at least)! It took several months, but finally in May 2015 the palpitations subsided. I still get a small bout of them every now and then when I am tense or nervous, but usually deep-breathing does the trick and they are gone within ten minutes or so.

Anyway, this winter was long and emotional. Chronic conditions like pain or heart palpitations have a terrible way of inserting themselves into your psyche. I thought about death pretty much all the time (which was more than my usual: a fair amount of the time). Counseling helped me to come to terms with a lot of these darker thoughts, plus, the up-side of facing the Big Unknown is that it can also prompt you to think very critically about how you want to live. Life is fleeting. How do you want to spend your time? Do you want it to be in front of a screen, at a job that you don’t really like, with friends who don’t make you happy?

Just about a month ago now an elementary school friend of mine passed away pretty suddenly from cancer. I had already been contemplating my dual-career situation for awhile: trying to pursue music and insurance simultaneously was starting to feel kind of like a black-hole. Both careers are focused on growth, and there is only so much time or energy to give to one’s job. At some point, one career would grow, and one would be stunted. The writing was just staring at me, from a wall I had been trying to ignore.

For some reason, after Tim died I started thinking, “If this was the last year of your life, what would you want to do for a job?” Obviously if I only had a week left, I would not go to work and I would just enjoy my time with family and friends.  But if I had a year (or 5 years) left on this earth, I would still have to pay my mortgage. So I can’t really choose whether or not I want to pay my bills, I just get to choose how I earn the money to pay said bills.

As soon as I asked myself this query, the answer became clear. I would want to be teaching more violin and playing music. I’m not sure if this happens with everyone, but I have received many loud and clear messages (from the angels among us disguised as friends and strangers) about music. It’s just what I am meant to do… I know it from the deepest part of my soul. The last two years, however, I thought that I could get away with doing it part time. But this was proving too stressful and not worth the extra income.

So about three weeks ago I talked to my boss at the insurance agency (he is a great person) and let him know that I had decided to leave my insurance career.  From this point forward, I will be teaching fiddle lessons full-time, supplementing my income with musical performances (and eventually recording).  I just find it to be so funny, because I basically wrote this exact same post two years ago. But as many artists do, I got too scared of being broke so I went out to get a second job.  This time I intend to teach and only teach as long as it is a satisfying career.  I told my husband jokingly that if I ever talk about getting a second job he should refuse to drive me to the interview! I know what I want to do, and the goal now is to remain true to my calling. The last two years have brought me full circle in terms of my career; my foray into the insurance industry may seem like wasted time, but as Anne Lamott so wisely wrote in “Stitches”:

“Periods in the wilderness or desert were not lost time. You might find life, wildflowers, fossils, sources of water. I wish there were shortcuts to wisdom and self-knowledge: cuter abysses or three-day spa wilderness experiences. Sadly, it doesn’t work that way. I so resent this.” 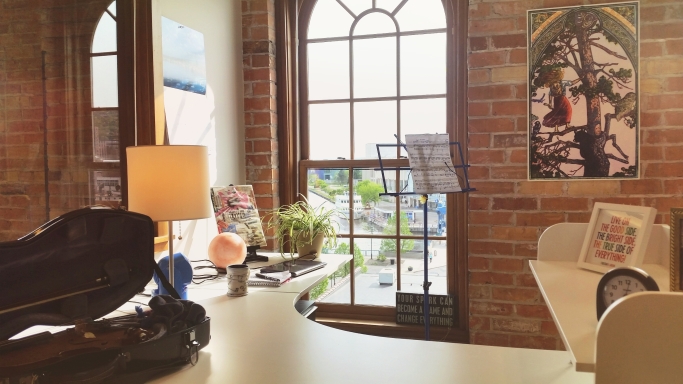 Cheers to following your dreams… and following them again when you get off-track!

← Eros and One-Dimensionality: An Application of Critical Theory to the Lives of Women with Physical Disabilities
Thoughts On Self-Employment →